Santicorn 2018 - The Hyperlight Dragon Kills You in Reverse

I wrote this for James Young of Ten Foot Polemic, who asked the Secret Santicorn at OSR Discord for “a monster that kills you in reverse, somehow”. What does that mean, you might ask? I still am unsure. There’s many ways to interpret something “killing you in reverse”. Maybe it means a glitchy healbot that overloads you with lifestuff, which somehow kills you (or condemns you to a fate worse than death), maybe it simply means a truck, stuck on reverse, that runs you over. Since there is no single right answer, I went with something simple and straightforward: something that moves faster than light and thus reverses causality, killing you before it actually does the action that killed you.

Acknowledgements: Thanks so much to James for the prompt. Also thanks to the OSR JavaScript Cabal and especially Saker, who helped me brainstorm this thing gave valuable suggestions. 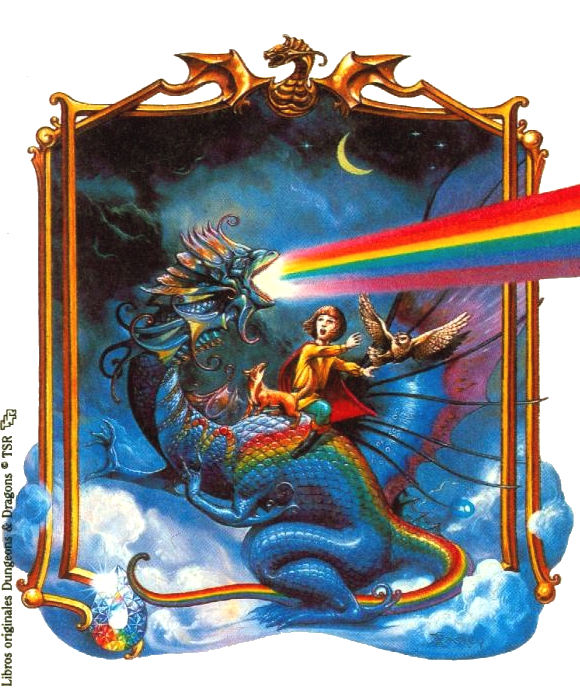 From the cover of "Revenge of the Rainbow Dragons", by Rose Estes and Harry Quinn (llustrator)

The Hyperlight Dragon can move faster than the speed of light (although only in short bursts), allowing him to reverse causality and make things happen before he does the action that triggers the effect. To be precise, he can make things have an effect 6 seconds before they happen. On any round, if it takes no other action, it can do one of the following:


-FTL Dodge: On its turn, the Hyperlight Dragon can decide to retroactively move out of the way dodge any attacks aimed at its location during the last round. It must have a clear path to move to a different location and can not dodge area effects or non-physical damage this way.
Breath Weapon

-Tachyon Beam: During a player’s turn, the Hyperlight Dragon can deal 8d6 damage (save vs Death Ray for half) in a 100’ line. The PCs see nothing and hear nothing. They do smell something: their own flesh burning as the searing light pierces their body.

The beam's origin does not have to be the Dragon’s current location but has to be a point it can reach in a round’s move. The Hyperlight Dragon must end its next turn in a location from which it could have feasibly launched the attack. The image of the beam (though harmless, as it has already dealt damage, is now visible: a beautiful rainbow of deadly lasers.

Any GM who uses this monster in their game should do so responsibly. If there is an effect caused by the Hyperlight Dragon, then the cause MUST happen during its next turn. If it doesn’t (either because it is unable to perform the causal action or because of GM oversight), the situation has caused a paradox. Spacetime will try to correct itself to account for your mistakes. Roll a d4 on the Spacetime Paradox table. The next time a paradox happens roll instead a d6, then a d8 and after that, a d10.

1, There is no Hyperlight Dragon. It never existed and never will. Any effect caused (or that will be caused) by it was instead caused by something else.

3, The recipient of the effect is duplicated. One version is the recipient’s original location and other’s location and circumstances are such that the Hyperlight Dragon’s effect makes sense. Each version has a 50% of actually being the original. If a sentient creature is duplicated, it has free will, and its goals and alignment are opposite to those of the original.

4, There’s a glitch in time. It rewinds to right before the paradox happened. You got off easy!

5, Time rewinds to the start of the encounter. Everyone involved retains their memories and rolls for initiative. Also, please don’t screw up this time.

6, Space itself accommodates to account for your mistakes. If the Hyperlight Dragon was too far to have caused the attack, the distance between it and its target has shortened; if there was a wall in the way, the way around it is now shorter. These distortions are a permanent scar on space itself, caused by your inability to pay attention. Congratulations.

7, Wow! Still causing paradoxes? Reality itself wants to correct the source of the problem. Why is this thing moving faster than light? The Hyperlight Dragon permanently loses its ability to move faster than light and reverse causation.

8, Reality is REALLY pissed off at you and your dragon. Poof — it’s gone. The Hyperlight Dragon disintegrates into dust just like that.

9, At this point, you’ve broken reality so hard it can’t fix itself. It’s permanently broken. All players must re-roll their ability scores, hit points, race and class, as reality itself is rewritten. The Hyperlight Dragon is also transformed into a regular adult chromatic dragon (1-2 Red, 3-4 Black, 5-6 Blue, 7-8 Green, 9-10 White).

10, Damn, you are careless. Reality is permanently and hopelessly broken. It shatters into pieces. Game over.
- December 24, 2018

Mad Magic-User by Henrik Pettersson A couple weeks ago, Jack Graham tweeted about the possible implications of the old-school Detect ...